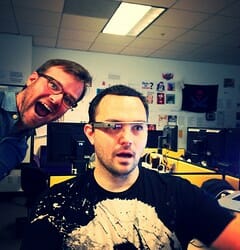 Anticipating the arrival of Google Glass is much like waiting for a child to be born. Will the child really come out looking like Crazy Uncle Henry or will he resemble a much cooler, hipper young cousin? Will he be as bright as his parents claim or simply become the class clown, bright, but too unfocused to get much done? Will he be full of talent, but too dorky to be taken seriously?

Half of the excitement surrounding Google Glass are the questions: what hopes will be fulfilled? Where will it fall short? After all the hype surrounding this new technology there are sure to be opinions on both sides.

Google Glass is best described as a wearable computer. Developed by Google and attached to eyeglass frames, the new invention moves into a post-desktop age by displaying information in a hands-free format and allowing the wearer to interact with the Internet via voice commands and touch controls. Google promises, according to a report from CNN, that Glass can:

Until coffee shops are full of people wearing Google Glass, there will be more questions than answers. Among the early questions are:

CNET.com reports that Google is addressing the appearance of Glass by entering into talks with eyewear company Warby Parker. The hope is that the upstart eyewear company can find ways to address the less-than-cool factor by designing frames that consumers will want to wear, regardless of the computer attached.

There’s a distinct possibility that Google Glass is never going to be considered more than dorky or pretentious. It may well end up in the same boat as the Bluetooth headset, Segway, and pocket protector when it clearly wants to be the next iPhone. To truly succeed, Glass has to be considered “cool.”

With an initial price of $1,500, Google knows Glass is prohibitively expensive. They hope to introduce a less expensive model in 2014, which begs the question of what the new model will include and what will be cut.

There is also a question of how many kinks Google Glass is going to be able to work out prior to a wider distribution. Consumers who have been burned by not-ready-for-primetime technology in the recent past will be loathe to part with their money until they’re sure of what they’re getting.

Rumor has it that Glass may one day integrate with Google TV, says FastCompany.com. If so, it will change the landscape of how and when consumers watch television. DVRs from Direct tv already support streaming content to an iPad app, why not develop service to Glass? If it takes off, of course.

The fun of discussing Google Glass right now is that there is so much we don’t know. It could either turn out to a high-end designer toy like a Lamborghini or a well-intentioned flop like the Volkswagen Thing.