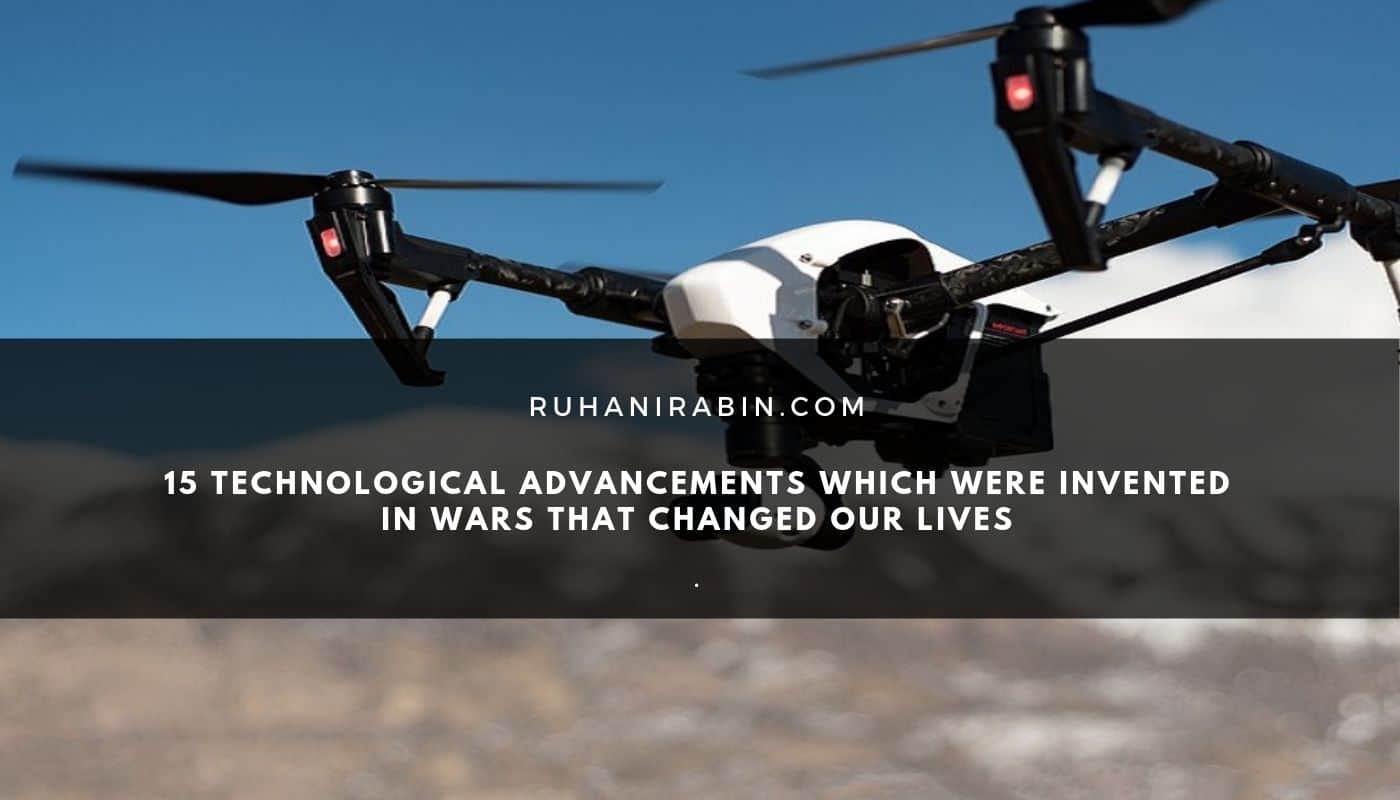 Do You Think Wars Should Happen?

Do You Think Wars Do Any Good to Society?

Most of us will say NO!

But did you know that one of the best inventions we have today been given by military and wars? Surprised? You should be!

There are various advancements we owe to warfare and which we use now in our day-to-day lives. Did your answer change now? Maybe!

So, what? Am I saying wars should happen? No, obviously not!

Wars lead to loss of life and cause conflicts between nations or group of nations. But in the situation of war, when there is a game of life and death, technology and science develop faster(a harsh but true fact). Let’s take a look at a list of 15 inventions or advancements of wartime which have been now adopted for civilians’ use.

15 Inventions Given By Military to Us

Duct tape was invented during WWII because soldiers were losing their precious time(and sometimes their life also) in sealing ammunition boxes. A new thing was needed which would take less time. After that, duct tape was invented and used for repairing military tools, equipment and vehicles. Soon it took place in day to day life of people.

GPS was originally set up by US military force to get the accurate positions of their weapons and vehicles. And also to keep their soldiers safe. Later, it was made available for civilians too. And today, every smartphone is equipped with a GPS feature.

During WWII, a man named Percy Spencer was working on the newly invented technology. He accidentally explored how radiation causes the molecules in the food to vibrate and heat quickly. In 1967, microwaves were launched for common consumers and residential kitchens across the world, before that they were too expensive and large.

Pads were originally invented for wounded soldiers to stop bleeding during medical treatment. They were found to be much cheaper, absorbent, and plentiful than surgical cotton. After that, in 1920 Kimberly-Clark introduced the first sanitary napkin for the use of women, named, Kotex.

The glue we use today is an accidental invention. Dr. Harry Coover was working on inventing plastic gun sights for weapons. He along with his team discovered a chemical substance that stick to everything it came in contact with and was heat and water resistant. Later in 1958, it was launched in commercial markets.

During World War II, the raw material required for manufacturing rubber tires was in high shortage which led to the invention of synthetic tires. Manufacturers were forced to find a solution and then extensive research was done to make synthetic rubber tires. Today they are used for all sorts of applications.

Keeping food fresh for a long time was a big concern for nations. Supplying food to soldiers was a cumbersome task and thus canned food was discovered. It became a very crucial part of WWI and WWII and proved to be very helpful in feeding soldiers and civilians because of the shortage of ration during WWII.

Jeep was invented when the military called off for a vehicle which was lighter and easier to transport. Several submissions were received from manufacturers, but the contract was given to the Willys-Overland Motor Company and the iconic Willys Jeep was invented.

Yes, You heard it right!!! Internet was developed as a US military need. They wanted a program which could connect machines and computers to transform information from one system to another. Later on, in 1963, ARPANET was finally formed which formed the foundation of the internet.

Wristwatches were first developed for the use of soldiers. They used it to strategically plan their maneuvers and to synchronize with them without alerting the enemy. Later they made their way into civilian life where they emerged as a fashion accessory.

As the term Aviator(a pilot) suggests, aviator sunglasses were first developed for pilots to protect their eyes while flying. They were lighter, thinner and snazzier, and prevented vision problems caused by sunlight at high altitude. Later, it was used by civilians for outdoors.

Penicillin saved thousands of lives during World War II, discovered by Alexander Fleming in 1928 because of the mass human loss he saw in WWI due to wounded infections. He realized there were no effective antiseptics available then, thus penicillin came. Later, it was used for civilians’ treatment too.

First known by unmanned aerial vehicle(UAV), drones were first used for battlefield patrolling and to go to missions that were too dangerous or dirty for human beings. Later, this technology was used very well in WWII for various purposes. Now, they are very well-used in civilians’ life too.

Night visions were developed to support the German Army and by the mid-1940s they were installed in tanks to make their way into the battlefields. A crucial part of WWII, now night visions have become a part of the civilian world in cameras and cars for a clear vision during nights.

This small pocket-friendly technology has saved countless lives since its inception. EpiPen was first designed for soldiers to use in the event of exposure to chemical warfare toxins. It allowed for fast, safe, and easy medication. Now, it is carried by civilians in hand-held devices who have several allergies.

These were the technological advancements developed during wartime. These inventions or advancements have become a crucial part of our lives now. Some of them are daily life usable things too. This list has not ended yet! There are various other advancements given by military, like jet engines, computers, tanks, poison gas, etc. The list is quite long.

Did your perception change about the wars now?

Till Then, Keep Reading, Keep Learning!!!

Henry Wilson was a historian and is currently a history professor. Apart from this, he is also associated with Instant Assignment Help Australia and helps students in their essay writing. In his free time, he likes to research on unexplored places and objects.