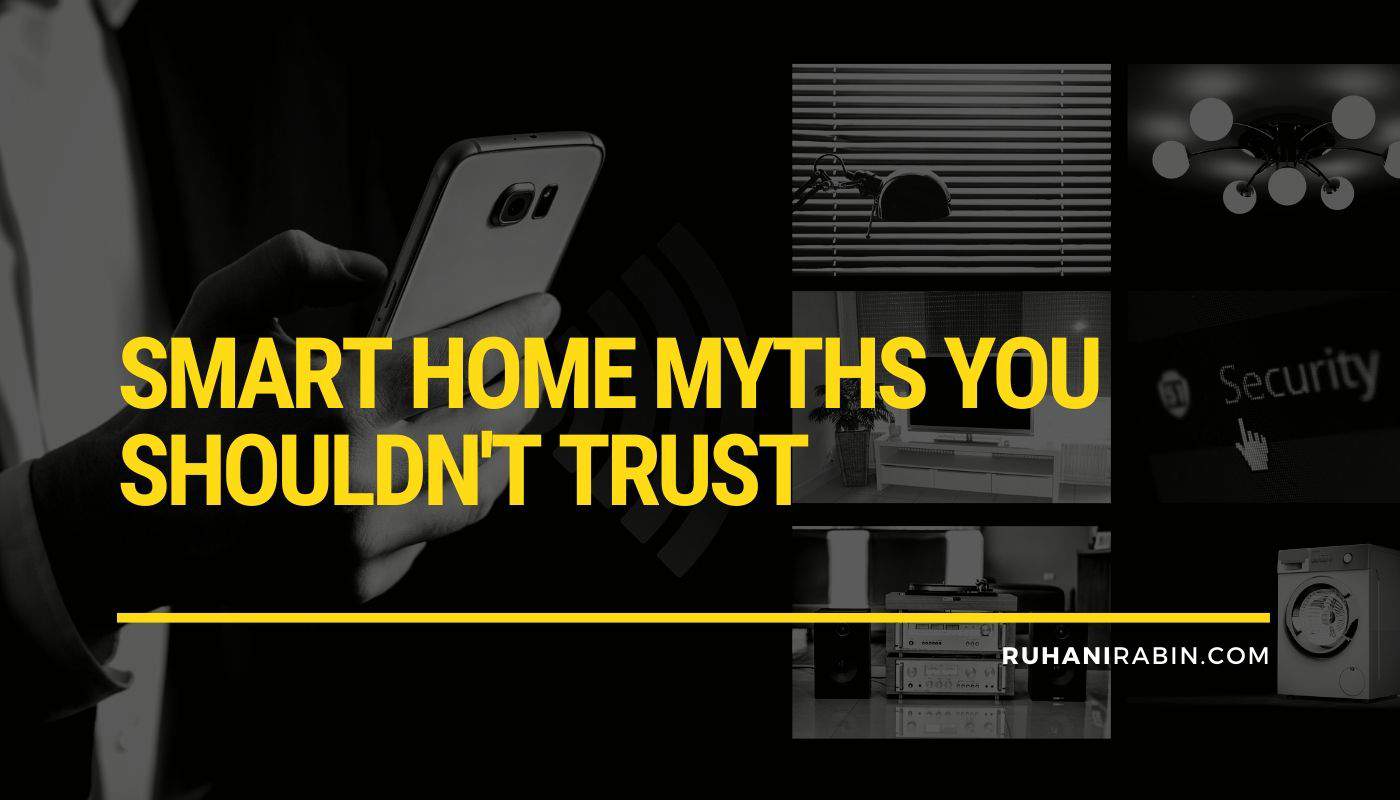 The smart home and home automation as part of the home security industry are rapidly evolving, and that won’t change anytime soon. We’re seeing an increasing number of users who want to take advantage of the benefits, which also leads to an increased amount of information available.

With that in mind, you can’t really trust everything that’s on the Internet, right? With so many things being said, there are some that are just false and might lead you away from investing in a safer, smarter home.

So, what are some popular myths that you’ll come across, but you shouldn’t trust? Let’s take a look.

Smart Home Tech is Too Expensive

This is the most common one you’ll come across, but also the one that will push you away from the easiest. To begin with, there are some excellent budget-oriented options that do work really well.

To add to this, there’s also the fact that you don’t have to buy everything at once. Get a couple of cameras and a smart lock first, and then add things as you go – that’s always an option.

If your ambitions for a smart connected home are modest, you won’t be spending too much money, and you’ll still enjoy the benefits.

You Must Have It

There’s absolutely no denying that a smart home system offers numerous benefits over a conventional one. Some of the most important ones include being able to access it from just about anywhere, and having a much greater sense of control over your home.

However, at this point, it’s not a “must” category by any means. It’s something that’s going to help a lot, yes, but if you think you’d be better off waiting for a few more months before making the investment, and you already have a system in place, you don’t have to rush it.

If you don’t have any kind of security system in place at the moment, though, by all means, go for it.

Among all the people you will find that tell you the smart home is a good investment from a security standpoint, you’ll find a few that say that these devices are just a gimmick. While there are certainly less such people today, compared to a few years ago, they’re still present.

You Must be Tech-Savvy to Use Them

This one stems from the fact that the initial such devices were somewhat complex. Setting them up required jumping through a few hoops, and they didn’t always work in a reliable manner. But those were just the problems of first-gen devices, and they’re gone today.

Nowadays you have a lot of devices that are very simple to set up and use. The hardware itself is well thought out, the software has an easy user interface, and literally, every function is a mere couple of clicks away.

Just about anyone can use such a device, from people who handle tech on an everyday basis, to people who will need to learn from scratch. It’s that simple.

You’ll Save a Lot of Money

While this might get your hopes up, it’s not entirely true. Yes, with smart devices such as smart thermostats or lighting, you do save a bit of electricity. This is simply due to the fact that they just won’t work when they’re not needed.

On the other hand, the main benefit of smart home security devices isn’t to save on electricity. It’s to make living in your home more convenient, and even more importantly, make your home a more secure place for you and your family. If you set reasonable expectations in this regard, you won’t be disappointed once your next electricity bill comes in.

The Investment Isn’t Worth It

A lot of people who don’t want to spend money on home automation and security are going to say this, but the truth is, it depends on how you take a look at things. If you’re investing in it to save money on electricity bills, as we just mentioned, chances are it will take a lot of time to get your money back.

When you’re looking at upgrading your smart home from a security standpoint, you’ll definitely be adding a few cameras in and around your home. This should give you the peace of mind of knowing that you can see what’s going on in your home at just about any moment.

On the other hand, we’re seeing quite a lot of security breaches that involve compromised data, so some people are worried that you might get spied on in your own home. However, this is pretty much a problem of the past.

In the past couple of years, manufacturers have increasingly worked on securing their devices, and many of the reputable brands will update their devices with better, more secure software even long after you buy them. Therefore, you can enjoy your smart home without worrying about this at all.

All Devices Work With Each Other

Unfortunately, this one isn’t true. When home automation started off, we saw a lot of manufacturers go for their own proprietary protocols, which meant compatibility wasn’t too good. And this is still true, to some extent.

On the other hand, we’ve got protocols such as Zigbee and Z-Wave that pretty much guarantee that two devices with the same protocol will be able to communicate with each other. If you want to ensure a unified system, by all means, go for one of these protocols, it’s more than worth it.