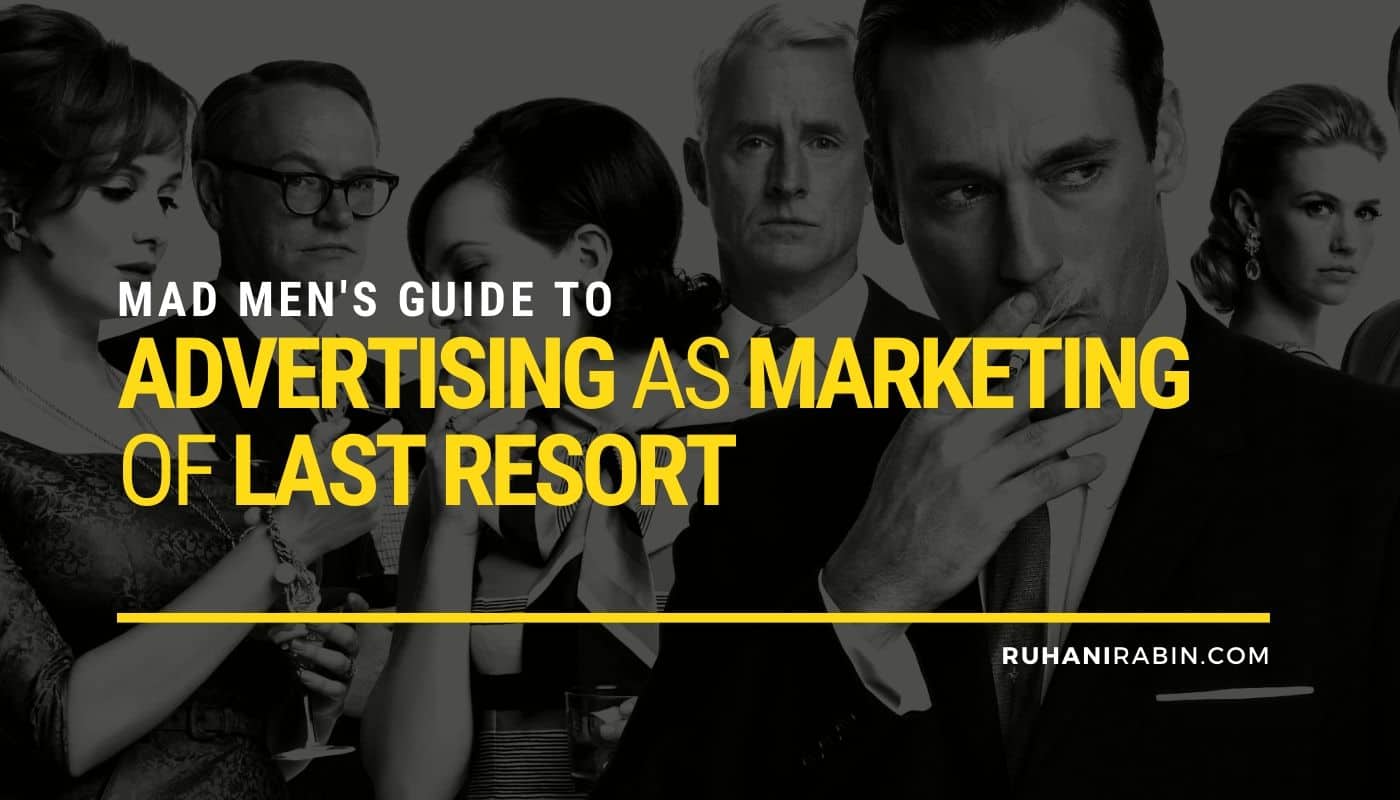 I want to share with you a long-held fallacy that advertising is effective. It’s not.

How can I be so sure?

The myth of advertising as an effective means of gaining new business is based on the fact that some people, in some way, at least to some extent can visibly measure the positive effect advertising has on their product.

If advertising is not showing any effect on sales, then the explanation is that you need different advertising.

So how come advertising is so prevalent?

Long-held beliefs are hard to shake.

When a business is starting out and trying to acquire initial funds, investors and bankers alike expect to see the advertising budget as part of the initial budget proposal.

Established businesses have a gay ol’ time rubbing elbows with the likes of Don Draper so they continue to include advertising budget as part of their yearly projections.

Did you know: Advertising budgets have doubled every decade since 1976.

What’s a Good Copy Worth?

Copy, for the uninitiated, is any text that tries to get you to buy something. Whenever you see a pizza ad, someone had to sit down and write whatever the ad (or person) is saying. In advertising vernacular, that piece of text is called a copy.

So what IS a good copy worth?

Information Resources studied the effect of advertising and concluded that “the relationship between high copy scores and increase sales is tenuous at best”.
They were being generous.

C’mon Dino…we need advertising. It makes the world go ‘round.

Costco’s approach to advertising is to spend exactly $0.00 on it. And yet, they continue to outperform Wal-Mart and Sam’s Club year after year.

Here is a fascinating case study, but first, watch this.

Foote, Cone, and Belding (a marketing company) produced one of the most memorable ads ever created in their 1980s campaign for The California Raisin Advisory Board.

With the annual budget of over $40 million, the dancing raisins managed to generate nearly $200 million in revenue via the sales of secondary products (dolls, mugs, T-Shirts, etc.)

The sales of raisins skyrocketed as well, at first. Mostly due to breakfast cereal manufacturers who jumped on the bandwagon and increased the number of raisins in their cereals and joined in the advertising.

And then came the crash all tumblin’ down.

After four years, the dancing raisin campaign was discontinued and the sales of raisins were lower than before the campaign started (Forbes, June 17, 1996). The California Raisin Advisory Board was abolished shortly thereafter.

But this proves that advertising works, no?

If history is any indication, this would be as easy as catching lightning in a jar, only to have the jar implode after 4 years.

Are you a CEO of a giant company and therefore interested only in short term profit generation or are you trying to build a long-lasting relationship with your customers?

Only you know the answer.

The material and stats for this article have been liberally pilfered from the most excellent book on marketing called Marketing Without Advertising (Amazon Affiliate Link) by Michael Phillips and Salli Rasberry.

How much does your business spend on advertising?

How do you measure its effectiveness?

Have you considered alternatives?

Today’s fabulous topic is from “Dino Dogan” who is the landlord at DIYBlogger.NET, a writer, biker, dog trainer, singer/songwriter, and a kick-ass Martial Artist (Wait did he missed anything else). He is currently hard at work on the Human-Dog Problem Tree; a thesis in a human-dog relationship. You can find him on Twitter or visit DIYBlogger.NET.