Birthdays are a must for celebrating whether it is a product or person. Don’t let any of these marvelous milestones pass you by without having some fun.

Another PC Fair and another time to go crazy. Feels like to buy everything and anything. I’ve previously written about Pikom PC Fair at   April 2008.   These Kind of PC fair can really drive a lot of people for sales. Not to mention now is Malaysia Grand Sales season so every shopping complex is packed, It’s weekend and PC fair is just beside KLCC so there was enormous amount of people were there. Well Lets cut the chase and dive into some info. Me, my colleagues/friends   Nick and Chui we all geek went there together and spend some quality 8 hours time at PC Fair (huh!). First of all there were so many peoples over there. 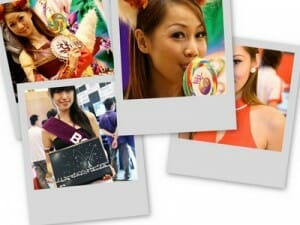 And all the corporate companies had their beauty contest (for sales) which I will reveal in a while. At top floor Acer, Benq, Asus, Hp, Sony, Epson, Samsung and   Intel booths. Acer had a lot of crowd because Acer is the only brand giving affordable laptops for general population. There was Twinhead laptops too but totally not recommended because of their heating problems and similar things. Lexmark has sold a lot of printers and because they were offering lowest price on monotone laser (RM199!), All in one and similar stuff. Samsung, Sony, Panasonic booths were had crowd for Cameras, LCD TV’s and of course Sony has their own style of VIAO laptops which is just awesome but yet a bit pricey (But the quality is there). Sony displayed a different prototype of desktop replacement and a mobile multimedia station which was so sleek, it has a qwerty keyboard with a touchpad and when you fold up the keyboard toward the machine the desktop changes the mode to media center.

From WordPress 2.3 onwards the administration dashboard displays Google blog search incoming links. Which is not always to the point and also not updated frequently. Lot of us suffers possibly because we are so used to look for incoming links to our blog from Technorati, which is more accurate, updated and to the point. I was looking for a possible solution in Google, found a few, namely from Soft Tech Reviews. Soft Tech Reviews described the situation related to wordpress 2.3.xx. I was studying it and I found out the structure for fetching the blog incoming links has been changed dramatically in WordPress 2.6, now it’s more object oriented code and the fetch RSS codes doesn’t stay in /wp-admin/index-extra.php , it actually uses index-extra.php to call the object from /wp-admin/includes/dashboard.php.