It’s hard to find a really working solution for hard disk fragmentation issue and needless to say day by day the hard disk sizes are growing along with more and more files. Recently I’ve found IObit SmartDefrag which is fast enough to defrag your huge hard disk in no time. It has a feature of set and forget it configuration which is really convenient for both office and home users. It has most of the features you can find in any commercial software.

Features of this powerful, award-winning defragmenter program include: 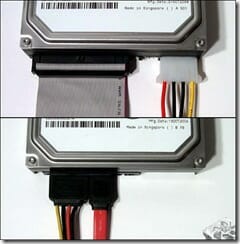 I’ve got a new motherboard for my computer recently. It’s a Gigabyte GA-965G DS3 series motherboard which comes with 4 sata II ports and 2 onboard sata II ports which provides 3GB/s specifications. Well I’ve gone through a number of troubles migrating to my new sata II drive. My previous drive is a IDE ATA Seagate 160GB drive which has 5 separate partitions and loaded with Windows XP and another partition is loaded with Vista ultimate. So as I got my new sata drive which is a 320GB sata II drive, I decided to put it as my first drive ( Disk 0 ) and the other IDE channel is assigned to disk 4. Both were master drives and mother preferences were set to give the main priority at the sata drive for booting. Anyway I did a cloning using Acronis True Image and cloned the whole drive into the new 320GB drive. After that I found out that the IDE drive is still booting and the 320GB sata drive is setting itself as second preference. So I dig out information regarding this and found out the facts lies beneath.. Here is some of the facts :

Microsoft has announced at December 2007 that Internet Explorer 8 has passed a test for standards compliance. Well it’s really hard to believe and it brings more questions to the Web Developers face.

The Acid2 test
Microsoft’s still top-secret Internet Explorer 8 passed what is known as the Acid2 test. Acid2 is a test case designed by the Web Standards Project to discover, if possible, errors with rendering Web pages in browsers and Web authoring tools. Basically, it tests how a browser or tool works with features from various Web standards.

The following standards are involved in the Acid2 test page: HTML 4, CSS level 1, PNG, and data URLs. In addition, the Acid2 guided tour overview page defines these features that are included in the test:

As a Developer you should come along into a situation that you need to compare or merge complex code fragments and Sadly most of us do it with notepad. Well have you seen WinMerge? Remember this century is not about how good you are in code but it’s about how can solve your problems.. So let me introduce to you the WinMerge, this program designed for open source developers and by open source developers.. Upgrading from old code to new code can be a real painstaking feature.. So here is WinMerge to save you some times.

We all know very well Microsoft and BSOD is two side of a coin. It’s inevitable how the BSOD scares us off. Now there is some other BSOD that can give you a descent naughty smile on your face.. It’s created by the Genius Mark Russinovich from SysInternals. Let’s take a step back in the history. Previously SysInternals made a huge number of Windows NT, 2000, XP & Server 2003 tools which the very advanced developers and core operating systems developers didn’t even dream about. With his numerous success with command line administration tools and core system level utilities he took immediate attention from Microsoft itself. At 2006 Microsoft bought over SysInternals and it was inevitable too. SysInternal Administrator tools are the optimal Swiss army knife for any windows server administrators. SysInternal Administrator tools are still freeware and available for download. So back to present, Mark Created an innovative BSOD emulated screensaver for windows and it utilizes the original ntoskrnl.exe from NT, 2K, XP, 2003.