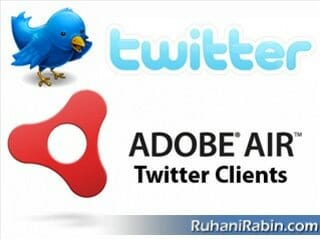 Twitter is become the most popular micro-blogging platform now a days and yes many of us preferred different kind of twitter clients. Some prefers desktop based twitter applications specific to Windows, Linux or MAC and some of us prefers web based twitter applications. Those are mostly platform specific twitter desktop clients, so they depends on target operating systems. Then came Adobe AIR platform, provides a common ground for most popular operating systems to build rich desktop clients, they act similar on multiple operating systems with common interface. Now there are a variety of Adobe AIR platform based Twitter Desktop Clients, lets take a look at the most useful ones. Bare in mind these Twitter Desktop clients requires Adobe AIR framework to be installed in your system before they can start working. Lets take a look at them.. 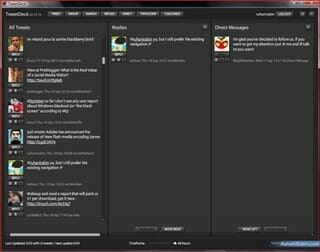 TweetDeck is an Adobe Air desktop application that is currently in public beta. It aims to evolve the existing functionality of Twitter by taking an abundance of information i.e twitter feeds, and breaking it down into more manageable bite sized pieces.

How does it do that?

TweetDeck enables users to split their main feed (All Tweets) into topic or group specific columns allowing a broader overview of tweets. To do this All Tweets are saved to a local database. The far left column will always contain All Tweets. The GROUP, SEARCH and REPLIES buttons then allow the user to make up additional columns populated from the database. Once created these additional columns will automatically update allowing the user to keep track of a twitter threads far easier. Being database driven TweetDeck allows the user to continue twittering even when offline. Tweets and direct messages are queued and then sent automatically when back online. This offline functionality also applies if Twitter is down. [UPDATE 07/07/2008 – this functionality has been temporarily suspended due to a small period when duplicate queued tweets were sent out. This functionality will be reinstated when a more robust solution has been put in place. I do not anticipate this being very long] 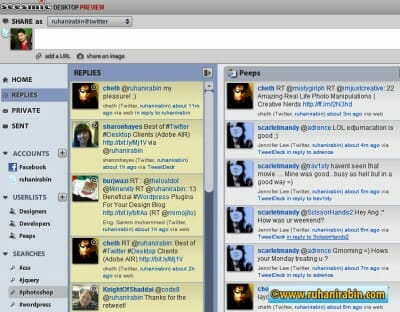 What is Seesmic Desktop?

TweetDeck alike features include the capability to monitor multiple feeds side-by-side in a similar fashion, create custom user lists, and post from multiple accounts while the application keeps track of which ones are which to keep duplicates at bay. You can also drag and drop photos from your computer to post straight to Twitter. Currently Seesmic Desktop is the only Rival for the most popular TweetDeck application. The preview release has its perks. A lot of feature should be included such as hashtag dropdown and translation services etc. But so far it’s a promising application 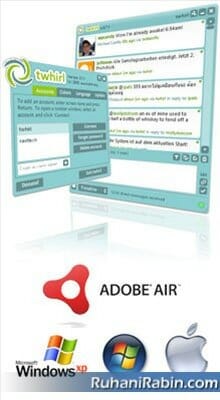 twhirl is a social software desktop client, based on the Adobe AIR platform. 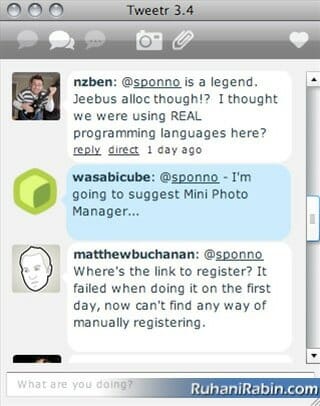 Send files to your friends, but just dragging any file on to Tweetr. Tweetr will automatically upload your file and when it is done will provide a short url to send to your friends (please do not upload copyrighted material). Use the webcam feature to show off you latest toys, bruise, haircut. To use the webcam click on the camera icon (if you have a web camera installed and you only see a white box, click the “select camera” link and choose a different camera from the drop down that appears). 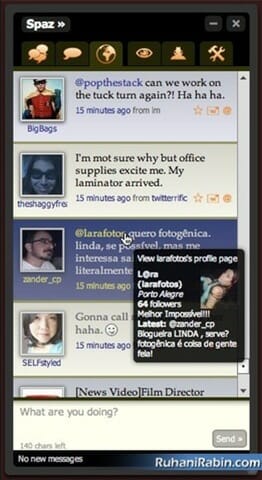 Spaz is a Twitter client for users who value free, open-source software, attractive design, and customizability. 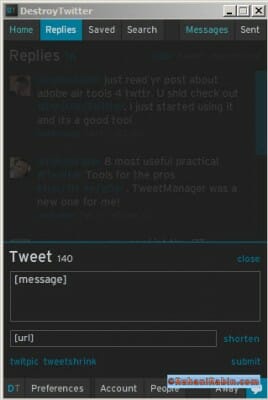 DestroyTwitter is a robust but compact Twitter application built to run on Mac, Windows, and Linux using Adobe AIR. It consists of a series of canvases that constantly update to keep tweets current and up-to-date using notifications that appear immediately after a new tweet arrives. DestroyTwitter also features complete direct messaging functionality. Messages and tweets can be replied to with the original visible for quick and easy reference. A search function is also available to track anything that’s being talked about.

Where to get it?
Download the latest release from here.

Well these are the some of best Twitter Clients based on Adobe AIR platform. Feel free to install and test out according to your taste. And yes don’t hesitate to share your opinion about them too. If you prefer to have a look at all the Twitter based applications and tools, have a look at the wiki listing of twitter apps and services. If you are interested you can have a look at Digsby which combines all your popular Instant Messenagers, Facebook, Myspace, Multiple Email Ticker and Twitter.