TwitPic is currently the most popular and largest image sharing service for Twitter. Due to its popularity, there are also popular twitter clients that have built-in support for TwitPic. Now what if we need something alternative than TwitPic? There are some applications that worth a try?Here I’m talking about the possible TwitPic photo sharing application alternatives that counts.

Pikchur is a simple service that updates your social networks / micro-blogging platforms with pictures! No need to signup! Just login with one of our many supported platforms and start sending your Piks today! Plixi is a service for sharing pictures around people, places and events and creating collective memories. Plixi allows users to instantly share their photos to popular social networks through mobile devices and on the web.

Plixi specializes in providing an innovative open API, and mobile SDKs, to the developer community of Twitter, Facebook, MySpace, LinkedIn, Foursquare and more to come. The platform empowers third-party application developers to quickly add media sharing capabilities and other unique features to their applications without incurring the resources to build, innovate and manage a media sharing infrastructure. Proving the power and scalability of the platform the company’s website is architected using the same open API offered to third-party developers.. yFrog comes from the owners behind well know photo hosting service ImageShack and it is very simple to use. Upload, log in with your Twitter account, share and that’s it. Simple and fast. yFrog is also supported by The most popular Twitter desktop client TweetDeck and Seesmic. pic.im is a new and cool service from tr.im for sharing images within services like Twitter. Like tr.im, pic.im collects and then presents cool graphical reports for your shared images, such as how many times they were visited, from which locations, and referred by which websites. With pic.im you know exactly how many people clicked to see your images, and from where.

If you share images on Twitter, pic.im is not only the best name, it is one of the shortest. And because it is 100% integrated with tr.im, if you have an account at tr.im, you already have a pic.im account, and vice-versa. You can combine all your URL sharing needs in one place. Twitgoo is another simple photo sharing tool. You login with your Twitter login, the interface mimics pretty much of Twitter web interface, except that you can attach photos to your tweets. This is also supported by Seesmic Desktop Client 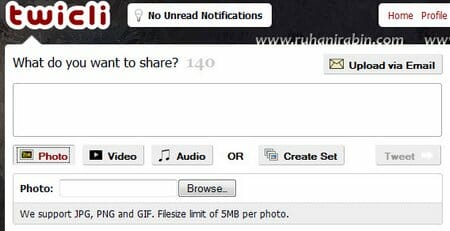 This topic supposed to hold 5 sites but this site also rocks. Twicli is a free service that allows users to upload both photos, audio and videos through the Twicli platform and display them to their friends on Twitter.

Twicli has been designed with user experience in mind. We want the site to look and feel like Twitter offering a seemingly seamless transition from one site to another.

Users can upload photos and videos and comment on each, these comments are then broadcast on twitter via the means of @replies. The Twicli frontpage features the most recent content uploaded by Twitter users.

Twicli is powered by Picli’s social photography technology alongside integration with the brilliant Twitter API.

Personally I love the concept of Pikchur, Twicli and TweetPhoto. What’s your take? Do you know other cool and useful TwitPic alternative photo sharing tool? Let me know, I will update the list accordingly. You can find me on twitter @ruhanirabin if you want to let me know of any alternatives too. Don’t forget to share your comments.